Rome, 20 April 2021 – Civil society and Indigenous Peoples’ organisations share with deep regret their collective and critical assessment of the Voluntary Guidelines on Food Systems and Nutrition (VGFSyN). The final VGFSyN present a lost opportunity to guide a much-needed radical transformation of food systems around the globe and effectively tackle the root causes of the growing hunger crisis.

During an accelerated endorsement of the VGFSyN by Member States at the 47th CFS Plenary Session in February 2021, the Civil Society and Indigenous Peoples’ Mechanism (CSM), an essential and autonomous part of the United Nations’ Committee on World Food Security (CFS), announced that its final decision on whether to support or not this endorsement would be done after due internal consultation process. As a result of this process, the CSM, voicing the perspectives of millions of smallholder farmers, Indigenous Peoples, labor unions, consumer groups and other civil society organisations, shared their collective conclusions in a public briefing on 20 April 2021 stating that the Voluntary Guidelines for Food Systems and Nutrition endorsed by Member States are not sufficient for the food system transformation urgently needed towards a fairer, more sustainable, resilient and healthier model.

The CSM and its constituencies have carefully analyzed the final outcome of the Guidelines, and expressed in their positioning document that the VGFSyN are more oriented to maintain the status quo than committed to recognize the public interest of food systems. Instead, the document perpetuates the accumulating failures of the hyper-globalized and corporate-dominated trade, investment and finance by blurring identities and responsibilities in relation to governance, decision making and democratic accountability. “We witnessed how, at a time of global ecological and social crisis, which is becoming visible in the form of a pandemic, there was a clear inclination in the negotiations to avoid drawing attention to the responsibilities of the different actors, especially the responsibility of the agro-industrial model which is the one to blame both for the climate crisis and for nutritional deficiencies on a global scale,” said Isabel Álvarez, co-coordinator of the CSM Working Group, from Urgenci International.

According to the CSM, its positioning did not come unexpectedly and was deeply marked by a careless methodology since May 2020, with accelerated timings conditioned by the upcoming UN Food Systems Summit, a hostile atmosphere and strong power plays, which aimed to impose the interests of corporate-dominated and export-oriented countries and industries, rather than seek to ensure human rights.

CSM has been reiterating the need to revert modalities of this process in order to guarantee the CFS principles and special attention to the people most affected by hunger and malnutrition. “This statement also serves as a broader call of awareness for the CFS. We see the fast-paced advancement of the export-oriented and market-led solutions to address food security and nutrition concerns and corporate takeover of food systems’ knowledge generation and governance spaces. This declaration intends to protect the reformed CFS, but also the UN as a whole, from this trend that threatens multilateralism and human rights, of which the UN Food Systems Summit is a clear example of,” states CSM’s positioning document.

On the way forward, the CSM has announced that it will continue to disseminate its own vision for food systems and proclaim its critical positioning towards the VGFSyN, while also remaining committed and attentive to the follow-up mechanism and actions, both by the CFS and its actors, in the implementation of the guidelines at all levels. The CSM will formulate preventive advice and limit the potentially negative impacts on its constituencies of some of the provisions disseminated in the chapters of the VGFSyN approved in February 2021.

Speech by Gisela Illescas of the CSM Working Group on Food Systems and Nutrition, and MAELA Mexico

Download the CSM vision on food systems and nutrition 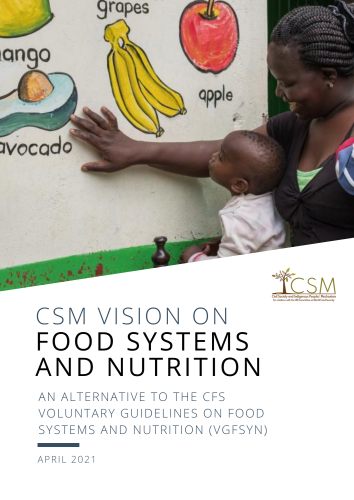 HLPE e-consultation on the zero draft ...

“There is no nutrition without Agroecology”, ...