After CSM’s collective assessment on the Voluntary Guidelines on Food Systems and Nutrition (VGFSyN) and our public briefing and press release expressing our critical positioning towards the endorsement by Member States of the VGFSyN, Devex published a misleading article on the above mentioned developments. The author reached out to the CSM for an interview to which unfortunately the CSM members could not respond to before her deadline – 72 hours. Little did we know that the article she would publish a few days later would be crippled with factual errors and misleading arguments on CSM’s positioning.

The article starts by declaring that “a coalition of civil society representatives is rejecting guidelines for food systems reform that were recently adopted by the United Nations Committee on World Food Security, or CFS”. This is factually wrong, as the Civil Society and Indigenous Peoples’ Mechanism (CSM) for relations with the UN Committee on World Food Security (CFS) is not a coalition of civil society representatives, but a legitimate space which is an integral part of the reformed CFS itself. Moreover, the CSM is an open and inclusive space and hence has participating organizations but also, and very importantly, Indigenous Peoples, contrary to the suggestion that it is only constituted by ‘representatives’ from ‘civil society’. This first sentence might suggest that the CSM is external from the world’s foremost inclusive intergovernmental platform on food security and nutrition (the CFS), when in fact the CSM is an essential part of it, duly recognized by the CFS’ Member States, and certainly not a coalition.

Further, the piece quotes comments by the CFS Secretary, Chris Hegadorn, saying “CSM’s perspective was taken into account during the six regional consultations CFS held to get feedback on the guidelines draft”. This might inaccurately suggest that CSM’s inputs were meant to be considered only during the Regional Consultations, obscuring the fact that CSM is an integral part of the CFS and has a say throughout the entire journey of its policy documents – from the consultations to the drafting stage, and from the negotiations to the endorsement. While it is true that the CSM had an active participation in the Regional Consultations and the outcomes thereof were positively welcomed, the mechanism also participated very actively during the negotiations.

An additional and erroneous statement suggests that the CSM was responsible for delaying the whole process of the negotiations, which became the cause itself for little time for endorsement of the Guidelines. The article states that “CSM representatives argued virtual negotiations would exclude some of their members who were not able to get online, and delayed the process until September. That left CFS member states less time to agree on the final text before the guidelines were to be adopted at the February meeting”. In fact, the decision to postpone the negotiations was taken by the Bureau of the CFS, which only Member States are part of – hence, not the CSM. Moreover, the revised timeline for the process was also agreed by the CFS Chair and the CFS Bureau. The CSM, which is part of the other key governance body within CFS, the Advisory Group, was only asked to give advice. The CSM voiced in numerous occasions that virtuality could not replace in-presence negotiations and that the methodology of virtual negotiations must be more inclusive. Among its concerns were the fact that all meetings were set in European time zones, forcing an inhuman schedule upon participants based in the Americas and Asia, and the digital divide experienced by many of CSM’s constituencies with poor or even no access to Internet.

Finally, and contrary to what the Devex piece might suggest, it is important to highlight the positive and comprehensive reactions by Member States during CSM’s public briefing vis-à-vis its positioning and way forward. There seemed to be an agreement that this was a healthy exercise for preserving democratic and inclusive processes, such as the ones taking place within the CFS. 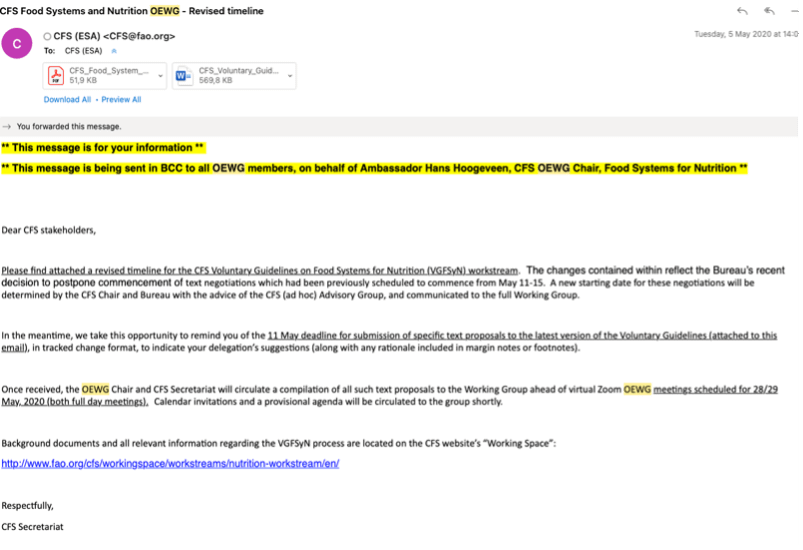 Screenshot of the email announcing the postponement of the negotiations process.