Their two-year mandate can be renovated only once for two more years. When the Coordination Committee elects the AG, at least 75% of the members should be from social movements and priority should be given to constituencies representing small food producers. Although only four CSM AG members can participate in each CFS Bureau and Advisory Group meeting, the CSM Coordination Committee can decide to elect more than four members to share the responsibility and rotate participation in the meetings.

In addition to the roles and responsibilities described above, the CSM AG members play roles related to the internal functioning of the CSM, as described in the Terms of Reference of the group.

CFS Advisory and Bureau meetings in 2021 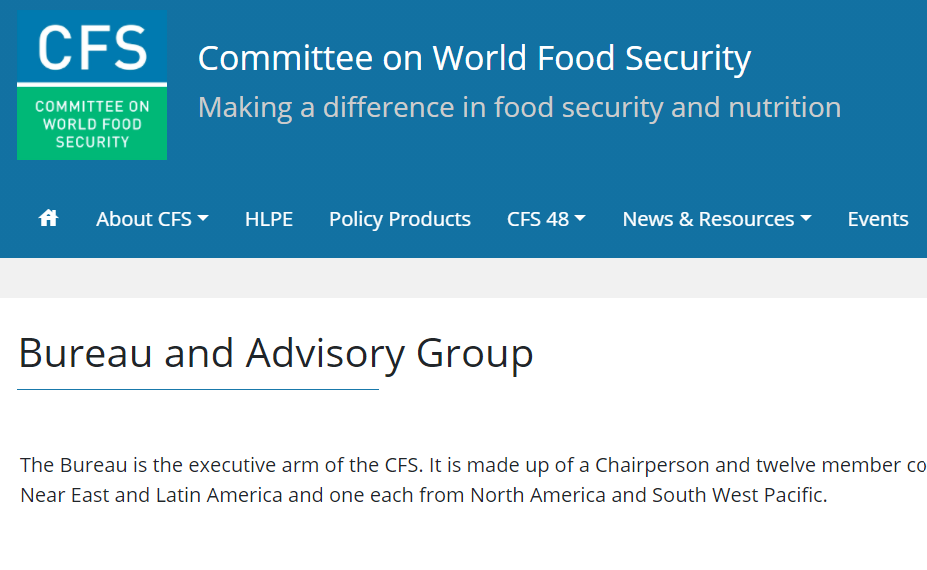 CSM Contributions to the CFS Joint Meetings of the Advisory Group and Bureau 2020-2021   4 March 2021 CFS Advisory Group and Bureau meeting This meeting will address the following topics: a) feedback and assessment on the past CFS 47th Plenary Session; b) draft agenda of the next extraordinary CFS Plenary Session of 4th June 2021; c) CFS contribution to the HLPF; d) the monitoring process fo...

Preliminary CSM messages to the Extraordinary Meeting of the CFS Bureau and Advisory Group (31 March 2020)  “No volveremos a la normalidad porque la normalidad era el problema” Standing up to the crisis The CFS was reformed in 2009 to strengthen the coordinated global policy response capacity on food security and nutrition which was found wanting during the food price crisis in 2007/2008. It ...

Please find here the Agenda and all background documents of the next CFS Advisory Group and Bureau meeting that will take place on the 8th of July:   Agenda GSF OEWG Workplan Second draft of the Background Document on Urbanization, Rural transformation and implications for Food Security and Nutrition: Key areas for policy attention and possible roles for CFS Summary of the 2nd Technical Works...
to top