As the UN Food Systems Summit takes shape, it is obvious that it does not intend to trigger the deep systemic changes necessary to address the massive challenges the world faces, including the hunger and climate crises. The Civil Society and Indigenous Peoples’ Mechanism fears that the Summit will do more of the same – green and poor wash – to preserve and perpetuate interests of a system of globalised, corporate-dominated trade, investment and finance, that benefits the world’s 10 percent, but has wreaked havoc on our planet and majority of the world’s people.

In October 2019, the Secretary-General of the United Nations announced he would host a Food Systems Summit in 2021 with the aims of maximizing the benefits of a food systems approach across the entire 2030 Agenda, meeting the challenges of climate change, making food systems inclusive, and supporting sustainable peace.

But the Summit is under fire from hundreds of small food producers, NGOs and civil society and Indigenous Peoples’ organizations – including the Civil Society and Indigenous Peoples’ Mechanism (CSM) – who believe the Summit is ignoring human rights and sidelining the small-scale producers who produce 70-80 per cent of the world’s food, prioritizing instead the interests of corporations.

In March 2020, the CSM, together with more than 400 organizations, sent a letter to the Secretary-General to share their key concerns, flagging the undue corporate influence, a missing human rights grounding, and a lack of transparency in the process. The letter remains unanswered to this day.

In October 2020, the CSM and other organizations of those most affected by hunger, malnutrition and ecological destruction launched an open invitation to join forces to challenge the Summit which will take place on 23 September 2021. This new platform of organisations and individuals takes the name of Autonomous Peoples’ Response to the UN Food Systems Summit.

Finally, in May 2021, those who responded to the open invitation decided to organize a counter event in parallel to the UN Food Systems Pre-Summit. The event, entitled Counter-Mobilization to Transform Corporate Food Systems, took place in a hybrid format between 25 and 28 July.

Some 9,000 people attended the event. This was hailed as great success, as the event drew together a wide variety of attendees and was able to catalyze and amplify a counter-narrative to the official proceedings. With critical articles and pieces published in major media outlets such as the BBC, Al Jazeera, and Italian state TV Rai, and several thousands of #FoodSystems4People posts on social media seen by potentially 10 million users.

The counter-mobilizations continued in September 2021 and beyond. Visit the foodsystems4people.org microsite for the latest updates.

It is time to connect our struggles and fight together for a better world based on mutual respect, social justice, equity, solidarity and harmony with our Mother Earth.

Rise up against corporate food systems!

Read and sign the political declaration of the People’s Autonomous Response to the UN Food Systems Summit!

In this 25th year anniversary of food sovereignty, we reaffirm our unity and commitment to push for radically transformative strategies which recognize peoples’ needs, accord dignity, respect nature, put people above profits, resist corporate capture, and work collectively towards a fair and decent food system for all! 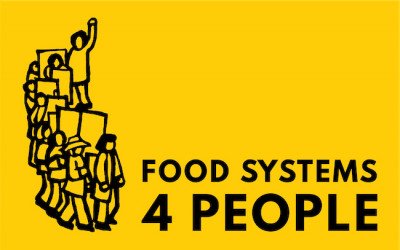 Declaration: No to corporate food systems! Yes to Food Sovereignty!

Thousands mobilize to call for food systems that empower people, not companies

Opening Declaration of the Counter-Mobilization to Transform Corporate Food Systems