Independent report by the Civil Society and Indigenous

Peoples Mechanism for the Committee on World Food Security 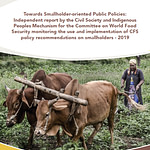 Small-scale producers or smallholders feed the large majority of the world’s population, yet their importance has only recently been recognized in global policy spaces. The UN Committee on World Food Security (CFS) has been a key player in this, challenging the dominant narrative that the only solution to food insecurity is calling on technology to produce more food and agribusiness value chains to process it and channel it to consumers. Since its reform in 2009, the CFS has recognized both the agency of small-producers as well as the key roles they play in right to food realization and in achieving food security and nutrition. Through policy convergence processes, it has worked towards supporting smallholders in these roles. This policy focus is a direct result of the participation and evidence of small-scale producers from around the globe in CFS policy processes.

This year the CFS is placing smallholders at center stage, monitoring the use and application of three CFS policy recommendations: Investing in Smallholder Agriculture for Food Security and nutrition (CFS 40, 2013), Connecting Smallholders to Markets (CFS 43, 2016) and Sustainable Agriculture Development for Food Security and Nutrition: What Roles for Livestock? (CFS 43, 2016). This report is the contribution of the Civil Society and Indigenous Peoples Mechanism (CSM) to that process. Following a human rights-based approach on monitoring and based on exchanges with actors from around the globe, this report takes the reality on the ground as the basis of analysis to assess not only how the policy recommendations have been used at the national level, regional and global level, but also where their potential is and further work is needed.

The report begins by highlighting the progress made in the use and application of the CFS smallholder policy recommendations. The recommendations have helped to shape the content of other UN policy initiatives and legal instruments, including the UN Decade of Family Farming and UN Declaration on the Rights of Peasants and Other People Working in Rural Areas. Also within the CFS, these policy processes have contributed to a common understanding and language on the importance of respecting, protecting and fulfilling women’s rights in the context of food security and nutrition. Civil society groups across the globe have used the recommendations in their advocacy efforts, for example in influencing policies that support local family-farm production for local markets in West Africa and challenge one-size-fits all food safety regulatory regimes in Australia. Governments, like Portugal who adopted the National Statues for Family Farming in 2018, have also used the recommendations to shape national legislation. Overall, although the policy recommendations have been adopted at painfully inadequate rates, their use and application demonstrates both their potential to redirect global policy away from productivist solutions and their importance to improving smallholders’ capacity to make fundamental contributions to food security and nutrition as well as to the progressive realization of the right to adequate food.

The report then moves to describe where the CFS smallholder recommendations and their adoption have fallen short. The report notes that there continues to be a deep lack of recognition of the crucial role of smallholders in feeding the world. Despite some success in adoption, very few governments have adopted the CFS policies and they are not well-known outside Rome. Even where policies have been adopted, challenges remain due to failures to fully implement, deep levels of policy incoherence and a lack of commitment to monitor policies through participatory processes. The priorities identified by smallholders themselves, such as peasant agroecology, remains underfunded and under-supported. Instead, states funnel public funding towards large-scale production without recognizing the important role of agroecology and territorial markets in mitigating and adapting to climate change and in supporting local production and community development. Further, the participation rights of smallholders continue to be violated. As a result, smallholders remain invisible with their rights unrecognized and unrealized.

The future of our food systems is more than ever at stake. According to the recent figures, rates of hunger, malnutrition, and food insecurity are on the rise, spurred by unsustainable levels of inequality within and among 2

countries. The reality on the ground is that day-by-day the world’s smallholders’ livelihoods continue to be destroyed and their small-scale food production is under attack in all countries and territories. It is time to sound the alarm, and to use and apply the policy outcomes that have been negotiated and agreed in the CFS to challenge the dominant narrative and inform smallholder oriented public policies on all levels.

Smallholders can and do feed the majority of the world’s population.

Smallholders can and do promote sustainable, nature-based models of production

It is time to defend them and give their voices more prominence in the fight against hunger.