Updates on a possible CFS policy response to COVID-19

Despite some strong voices calling for a prominent CFS role in the global response to COVID-19, during CFS High-level events in October, the Bureau decided in its meeting of 27 November to not foresee any policy response process to this crisis. The urgency and people’s current reality seems to have been left out the Committee and ignored. This frustrating lack of relation to the reality of the ground is reflected in the current timetable of the upcoming CFS 47th Plenary Session where no specific policy debate and possible subsequent policy decision is foreseen nor explicitly mentioned. Bureau members rather decided to mainstream COVID-19 throughout CFS work streams and agenda of the plenary, stating that many of the policy dialogues foreseen in the CFS 47th session would be likely to entail references to COVID-19.

To learn more, visit this dedicated web page where CSM gathers all publications, statements, contributions and material related to the urgent need of a CFS global policy response to COVID-19.

The CFS Advisory and Bureau meeting addressed the preparations of the upcoming CFS 47th Plenary Session and included an exchange with the HLPE Steering Committee on COVID-19 and the Food Systems Summit. The CFS Chair’s summary of the October high-level events will also be included as part of the background documents informing CFS 47th Plenary Session. Please find here CSM contributions and related CFS Bureau outcomes.

On Friday 18th of December, the second official week of CFS policy negotiations ended. This second week was expected to finalize the Guidelines on Food Systems and Nutrition, scheduled to be endorsed at CFS 47th Plenary Session in February 2021. The week from 14 to 18 of December, with a total amount of 45 hours of virtual meetings in five days, has nevertheless confirmed that the content of this Guidelines is still highly controversial and still reflects very polarized positions on key aspects of the text, on which consensus was not possible to reach. Despite the additional number of informal friends of the chair’s meetings hold throughout October and November, to better prepare the ground of this second week of negotiations, the Guidelines were not finalized and more time will be needed to achieve the task.

The CSM strongly hopes that this third round of negotiation, will offer the opportunity to retain the original ambition of this text and process. During the second week of negotiation, as during previous Friends of the Chair meetings, the sustainability dimension of healthy diets, the ecological dimension and public objectives purposes of food systems, as well as the crucial role of local food systems and markets, were strongly opposed and attacked by a group of member states, together with the human rights-based approach and the recognition of the urgent need to transform current food systems.

New rounds of Friends of the Chair meetings are expected to take place from 18 to 21 of January 2021, and a third round of official negotiations is scheduled to take place from 25 to 29 of January 2021. The CFS Bureau will be consulted to assess if such process is feasible and compatible with the endorsement of the Guidelines in February 2021, in line with the CFS rules and procedure, which requires to ensure that CFS policy background documents are made available to all CFS members and participants, in all 6 UN languages, at least 6 weeks in advance to the beginning of the Plenary Session.

The process on the Guidelines on Gender equality and women’s empowerment (GEWE) kicked off with its first OEWG meeting on 30 October 30. In that occasion, the two Co-Chairs of the process, Finland and Burkina Faso, presented the first draft of the Terms of Reference (ToRs) for feedback and discussion. The CSM Women’s Working Group was very vocal in its efforts to strengthen the first draft, which was found weak and not aligned with the scope and mandate agreed by CFS members and participants in the MYPoW. Moreover, it was focusing on women’s roles rather than women’s rights, and lacked a mention of gender-based violence, as well as the inclusion of a gender perspective able to overcome a gender binary approach. Luckily, many governments held a like-minded position during the meeting and made a strong appeal to strengthen the text resulting as an outcome of this first OEWG.
In order to comply with a due inclusive, transparent and participatory process, the Co-Chairs of the GEWE work stream agreed to elaborate a second draft of the ToRs, incorporating many of the written comments, including CSM’s, received both by the OEWG members and participants and by the Technical Task Team members, releasing a second draft of the ToRs which was stronger and balanced.

A second OEWG meeting took place on 9 December with the aim of achieving consensus on this second version of the Terms of Reference which are expected to be approved by CFS 47th Plenary Session, in February. Unfortunately, the Russian Federation, Indonesia and the Holy See (this last one being only an observer) made several comments attempting to undermine the rights-based approach of the ToRs, and their non-binary gender approach.

The CSM welcomed the second draft and made very minor comments and edits, thus respecting the strong appeal made by the two Co-Chairs, and joining the spirit of consensus. A slightly revised version of the ToRs was circulated for a non-objection procedure to all OEWG members on 16 December and were considered finalized by 18 December, with no substantial changes or objection.

Due to the ongoing restrictions imposed by the pandemic, the CFS Bureau confirmed that also the CFS 47th Plenary Session, taking place from 8 to 11 of February 2021, will be hold virtually too. Despite CSM contributions, the Bureau confirmed a timetable that will challenge inclusive participation to the Plenary, since plenary sessions debates, as well as side events, are scheduled from 9.30 am to 5.30 pm Rome time.

The current timetable, was received with concern and surprise by CSM Advisory Group members when realizing that COVID-19 crisis, which has exacerbated so many pre-existing structural problems and which is affecting hundreds of millions of people most at risk on all levels, was not put at the center nor explicitly mentioned in the draft agenda of the plenary. Despite CSM’s vocal advocacy for such an inclusion and the urgent demand of a CFS global policy response to COVID-19, CFS Bureau outcomes disappointedly confirmed the draft plenary agenda as presented prior to the meeting, arguing that Covid-19 would we mentioned cross-cuttingly throughout the week and that CFS should not pursue a global policy response to covid, considering the current work plan already a stretch in terms of workload.

This Plenary session is expected to take decisions on the following relevant items:

Moreover, this upcoming CFS Plenary session will also hold its third Global Thematic Event to monitor the Framework for Action for Food Security and Nutrition in protracted crisis. The CSM Monitoring and Protracted crisis working groups are currently working jointly on the CSM independent monitoring report to be presented during this dedicated CFS plenary session.

A limited number of virtual side events will be taking place during CFS 47th Plenary session and the CSM Global Food Governance in collaboration with the Youth and Women Working Groups will be working to submit a proposal on CSM’s behalf.

➡️Any questions related to registration for CFS-47, should be made to: CFS47-registration@fao.org.

➡️Additional documents and more information about the Session will be available here: https://www.csm4cfs.org/need-policy-response-covid-19/.

In order to attend CFS 47th Plenary Session, participants should register in advance of the meeting through this link by 22 January 2021:
https://event-services.fao.org/cfs47

HLPE e-consultation on the zero draft of the Youth Report

The HLPE has launched its online consultation for the zero draft of the Report on “Promoting youth engagement and employment in agriculture and food systems”. The CSM Youth Working Group is gathering its contributions. Deadline is 7 January 2020. This HLPE Report, expected to be presented at the CFS 49th Plenary Session of October 2021, kicking off the process on the CFS Policy Recommendations. To have an overview of CSM youth activities during 2020, including the past contributions to the HLPE online consultation on the scope of the Report, click here!

Updates on Agroecological and other innovative approaches policy process

The calendar of negotiations of the CFS Policy process on Agroecological and other innovative approaches has been published. Negotiations are scheduled to take place in two rounds during 2021. The first round will take place from 29 to 31 March 2020 and the second from 3 to 7 of May 2020. The negotiations should be based on the latest draft text available and published on July 2020. Please find here CSM comments to the draft, as submitted at the end of September 2020. The Policy Recommendations are expected to be adopted and endorsed by the Extraordinary CFS 48th Plenary Session scheduled on 4 June2020. The CSM Working Group on Agroecology will soon resume its work of preparation towards this policy process that is expected to be highly controversial. To join the CSM Working Group write to cso4cfs[at]gmail.com. To have an overview of CSM contributions to the process so far click here!

Updates on the Food Systems Summit and CFS engagement

Due to the restrictions imposed by COVID-19 the upcoming CFS 47th Plenary Session will be taking place virtually. In order to ensure a moment of exchange and CSM briefing on the key challenges and highlights of the upcoming CFS Plenary a CSM virtual information session will take place on 2 February 2021. Save the date! More information and details for registration will be circulated soon!

On 4 February 2021 the CSM will hold a policy briefing open to all CFS members and participants to share its expectations, concerns and key political messages towards the CFS 47th Plenary Session. Save the date! More information and details for registration will be circulated soon! 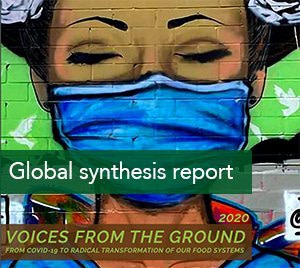 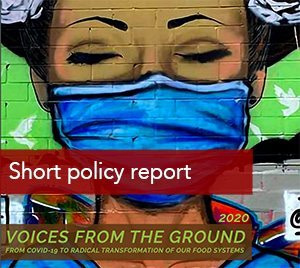 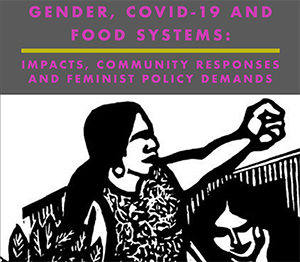 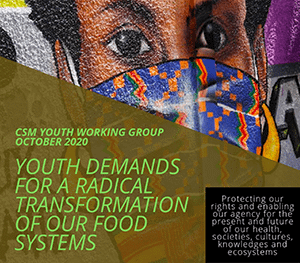